What is corruption and how do we measure it? How can we determine if anti-corruption measures work? Defining corruption is so tricky that even the UN does not attempt it, which makes the answer to the second question even more elusive.

In the field of anti-corruption research, there are a number of widely used indicators, such as: the World Bank’s Control of Corruption Indicator and Transparency International’s Corruption Perception Index. Researchers have recently worked on expanding their methodological repertoire, with a recent focus on indicators which indirectly measure corruption, or proxy indicators. To recognize recent work on proxy indicators, the U4 Anti-Corruption Resource Centre set up a challenge for researchers to submit their best work. Five projects presented their indicators at a workshop on 4 February in Bergen, Norway. 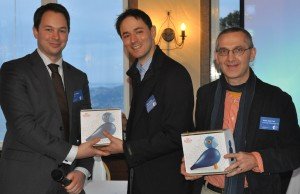 Mihály Fazekas and István János Tóth won the U4 proxy challenge for their work in analysing irregularities in public procurement processes.

Two FP7 ANTICORRP project researchers, Mihály Fazekas and István János Tóth, won the challenge for their work on developing indicators to measure institutionalised grand corruption in public procurement. The key idea behind their novel indicator is that by carefully analysing large volumes of administrative data, it is possible to observe a difference between open and transparent competition for public contracts from those which are awarded through deliberate rule-bending.

For the challenge, Fazekas and Tóth further distilled their findings to come up with three new indicators each of which looks at institutionalised grand corruption from a different angle:

In a working paper published last December, Fazekas and Tóth analysed publicly available information on public procurement contracts, comparing EU funded and nationally funded projects in Hungary, Slovakia, and the Czech Republic. Through their analysis, they concluded that EU funds were much more susceptible to favouritism, and that up to 1/3 of EU funds is touched by corruption.

Though it might seem counter-intuitive to measure corruption indirectly, Fazekas, argues that they are superior in many ways to direct measures:

“We definitely need more reliable indicators, and these indirect ones seem to be the best way to extend our understanding of corruption. The big value is that they are objective, so not based on perceptions, but on actual actor behaviour. Proxy indicators, if they are well-designed, are superior to other measures because they measure certain types of corruption specifically.”

In comparison to the other finalists, Fazekas noted that their indicators have already been tested and proved valid and reliable, and added that while their initial research has used data from three countries only, public procurement data is available for practically every developed and most developing countries, making the usage of these indicators feasible on a global scale.

Indeed, U4 partners such as DfiD and the World Bank have already expressed an interest in using the indicators in their work. Given the applicability of the indicator and the wide availability of data, Fazekas and Tóth are looking into covering more countries and conveying the findings to a broader policy audience.

Further information about the U4 Proxy Challenge is available here: http://www.u4.no/articles/the-proxy-challenge-competition/

An explanatory note and presentation by Fazekas and Tóth is available here: http://www.crcb.eu/?p=499